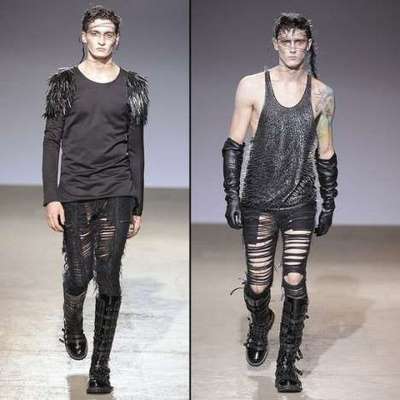 In a year where whole brands have begun marketing their clothing as unisex yet I am still fascinated, based on many of my own experiences, by the arousal I get from the metro tunnels to passing sidewalk glances. I do not socially identify as a cross dresser, a drag queen, androgynous, transsexual nor transgender though it seems someone really wants me to, as things I wear may be ‘too gay’ for the label.
I am fully secure with the fact that ninety percent of the time I am an ‘obvious’ gay man walking(strutting) but it becomes slowly draining to get this much negative attention from mainly ‘heterosexual’ males while I make my way from the west to the comfort of homosexual very friendly eastern havens likest the village, le plateau/mild end, and the old port. It causes one to wonder if I´m doing it all wrong, very right, or is something lingering on my face? It baffles me, slightly, especially to read articles written only a month ago using statements such as,

`…Recent times have however seen them remain fashion attire for just ladies and no longer men….`

but tickles me enough to tribute a whole post on a large minority in my closet: Leggings! Nearly a majority of the time I bust out of the door in my leggings/jeggings/tights, it is as if I hired my own spectators so that I would never feel alone again. Give them cameras and I would be Lindsay Lohan without the court dates. It is almost comical to be laughed at, pointed to, and whispered about in languages I may not even understand, especially when if one actually looked at the history of the skin tight sensation, I would be the one laughing.

I marked down an unofficial survey just to see the answer to the question, ‘When/Where/Why were leggings invented?’ Mainly the response breathed something along the lines of Olivia Newton John to American Apparel to Madonna. Which of course they sprayed them onto the scene again in the 1980s and early 90s  (not AA) and would never suggest taking that crown away. However, they would be wrong to assume that:

A. women invented leggings and
B. they were created some thirty years ago.

In fact, tights were used from the 13th century to the 17th century predominantly for MEN ( Robin Hood anyone?). They were utilized by men for warmth, comfort, and environmental defense and finally came to popularity amongst woman in time for the Renaissance. Not only were leggings all the craze for men but even the most ‘masculine’ of trades, which at the time not practiced by women. Government’s utilized them as a necessity for the military until WWII. Mountain men, fur traders, long hunters, and the cowboys used leggings as an armor against plants, animals, and the elements. The natives even dyed their leather leggings using animal brains. It was colder areas like Russia that men were wearing the tight trimmers most likely in wool, up until the 1970s, Ten years before Cyndi Lauper came jumping on stage in a booze infused dance party! Leggings were reintroduced to woman again in the early 1900s until reappearing in the 1960s, getting physical in the 1980s and making a triumphant return as a staple in 2005 for the Poca years today.

Now, I am not angry by the attention my skin tight delights make before the sun goes down, I am an exhibitionist. Nor am I a hetero-hater or trying to chastise and stereotype the way heterosexual men dress. I happen to actually be quite smitten with British comedian and husband to Katy Perry, Russel Brand who has made straight men envious of his leg hugging attire. However, I intend to push forward the megging agenda and will wear my tights and leggings until every piece of clothing is considered unisex (dreaming?). Declared as my own personal political statement against the status quo and their gender specific bibles. So, I DEMAND men (and women, and the gender unidentified etc) rise up and rock their tightest, loudest leggings proud and next time Broseph Joseph makes a stab at your masculinity, chuckling wearing his unfit pants he actually needs a belt for, Oakley’s, and gym socks with his circle jerk buddies, tell him he is just a hater that is jealous of your boogy and the fact that he can`t look as good as you in your floral wallpaper. 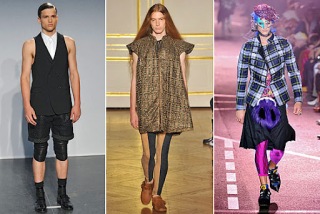 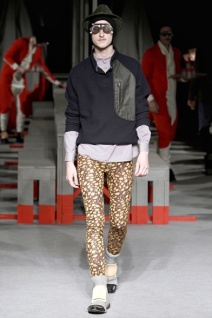